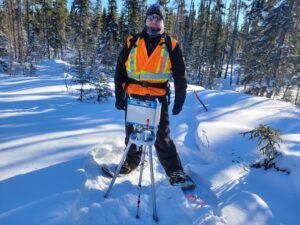 “Welcome to the next generation of Gravity surveys across terrains ranging from the Northern Bush in Canada to the Deserts of the Middle East. This image is from a Gravity survey just completed by Simcoe Geoscience Limited in winter conditions in early 2022 in Northern Ontario. The survey targeted clean energy metals, including copper, zinc and silver. Dense bush and -43 degree C temperatures were ultimately no match for the crew and equipment as Simcoe completed the survey rapidly using next generation Scintrex CG-6 Gravity technology plus an external RTK GPS solution. Interpreted results and drill targets were provided to the client only days after survey completion for rapid follow up. Simcoe Geoscience has surveyed more than 30,000 Gravity stations since 2021, making it a leader in detailed and reconnaissance Gravity surveys– for both dense and less dense targets, such as energy metals and uranium, respectively. The company relies upon its knowledgeable crew and proven CG-6 Gravity Meter from Scintrex to perform in a variety of ground conditions and mineralized environments globally.” 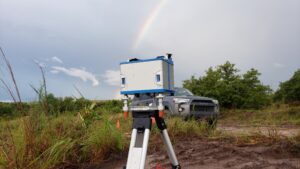 “Scintrex gravity meters have been a vital part of our geophysical toolbox for over 25 years.  The CG-6 provides extremely precise and repeatable measurements in a package that is lightweight and portable.  The stability of the readings after transport is a significant advancement over earlier models.  Shorter stabilization times, no data tares, and extremely linear instrument drift allow greater survey productivity,
while maintaining the highest levels of data precision.” 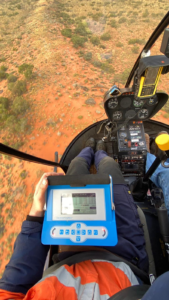 “Our second new Scintrex CG-6 making life easy in the chopper! It’s portability and repeatability is second to none!” 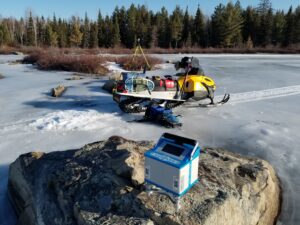 “I first used the CG-3 when it first came out in the late 80’s.  We just purchased and started using a new CG-6 and aside from standard battery and device technology improvements, its very repeatable even after transporting over rough terrain.  The tripod level arrows are different and make it much easier for operators with less leveling experience.  When combined with our new inertial RTK GPS system, readings are very fast and accurate.” 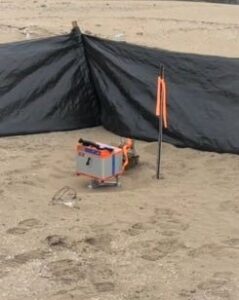 “I have used Scintrex gravity meters for over 10 years now, and a CG-6 for 2 years. The CG-6 is an incredibly stable unit and is very easy to use. Productivity is also great due to achieving quick stability of the unit prior to measurements. We have used it in a variety of environments and the CG-6 has performed extremely well under all conditions. I am very pleased with it and will definitely keep using Scintrex gravity meters in the future”. 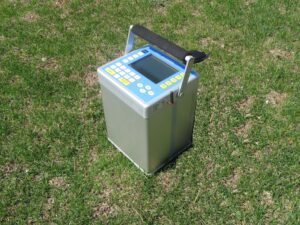 “We love the CG-5, and now own two of them. We are very fortunate to have built a strong reputation for sinkhole mapping, and the CG-5 has been a critical component of these types of surveys. It is easy to use, very portable, and a real workhorse.” 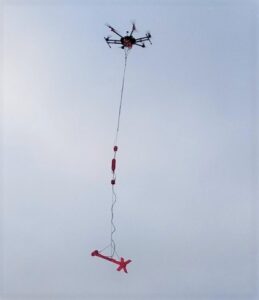 “We have flown the Cs-VL with our drone platform for over 4 years and is has proven to be an extremely reliable sensor at constantly obtaining great data quality in various conditions. Strong crosswinds or sudden obstacle avoidance maneuvers can create a pendulum effect on the sensor but the data from the Cs-VL, compared to other sensors that were tried, is not affected. We are very satisfied with the results as well as the technical support received by Scintrex over the years.”

How we achieve the lowest airborne Magnetic Survey on earth

Use this form to find things you need on this site